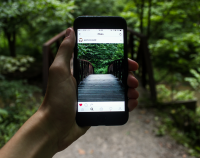 As an artist, it can be hard to get keep your posts from drowning in the crowded clamor of modern social media, something which can be highly frustrating for musicians with major announcements like an upcoming tour or new album. Here we look at how Instagram pods can be used to combat the relentless tide of an ever-changing feed.

Guest post by Allison Johnelle Boron of the ReverbNation Blog

In social media, we’re always chasing the algorithm, figuring out a way to beat it and rise above the eternal shuffling of what platforms think we want to see. As a musician, it’s frustrating to announce an exciting new tour or album release, only to watch your post sink slowly down your feed until it disappears. But a new Instagram technique called Instagram pods can help save your photos from fading into oblivion – and it might just strengthen your bond with your fans, too.

How does it work?

After assembling your pod (we’ll get into that in a moment), you create a group direct-message situation. When you post a new photo on Instagram, message it to your pod. The expectation is that they’ll like and leave a genuine comment on it immediately. Time is of the essence here; every second counts to Instagram when it evaluates what’s genuinely engaging.

How to get fans to join your pod

You probably already have a group of fans and friends who “like” most everything you post. (Ironically, the posts that don’t earn those stalwart likes are probably those falling victim to Instagram’s algorithm.) Start with these folks; chances are, they’ll agree right away to be part of your pod.

2. Reach out to your superfans on every platform

Think about which platform is your strongest. If you have over a thousand Facebook fans and maybe a dozen or so Instagram followers, promote your Instagram account on Facebook. You may think it’s pointless because surely your Facebook pals know you’re on Instagram, but you’d be surprised. A quick promo post will likely net you some followers. And if someone is willing to follow you on two accounts, he or she may just be entering superfan territory.

A definition of a superfan is kind of how the Supreme Court defines pornography: you know it when you see it. That guy who’s always the first to RSVP “yes” to your Facebook events. The girl who collects your singles. The person who comments, “First like!” on everything you post. Even if your personal superfans aren’t this aggressive, you can probably identify ones in your own circle. These people should be your first stop when building your pod.

If the majority of your superfans live on Twitter, make sure you reach out to them one-on-one and invite them to join your Instagram pod. If someone loves you enough to go the extra mile as a fan, he or she would probably be open to taking this step for you, too.

First of all, you do have an email list, don’t you? If not, stop reading this and make one! For the rest of the class, use your email list for more than just gig listings and song announcements. If your list is lying dormant, this is a perfect way to reinvigorate those lines of communication.

Some folks on your list have probably forgotten that they even subscribed, or they might be too busy to read your emails. Providing them with a way to follow along outside of their inboxes will probably be a welcome relief.

Just like above, if people are into your music enough to want to join a list to hear about your latest projects, they could be good pod candidates. The cool thing about this is, because email lists are old-school-cool, you’ll probably pull different kinds of fans that are obsessed with you on social, giving your pod a varied demographic and making you look more legit when those likes and comments come rolling in.

You know where to source your pod, but how do you entice people to actually participate? By creating a contest, of course!

In general, people like free stuff, but they love winning. Offer up concert tickets, merch – even a private show if you can swing it – to the member of your pod who comments first, comments most often, instigates the most engagement (by tagging his or her friends in the post, inviting others into the pod, etc.), and more.

There are simple, easy ways to reward the people who are making it possible for your posts to actually show up on Instagram. Chances are, your “pod people” (heh) are already familiar to you, and you can guess what motivates them. If not, ask! Just be careful not to make it seem like you’re begging.

Outside of contests, you can generate a custom hashtag for your pod and make sure those people get some special perk, whether it’s early access to merch or a discount on your album. They’re doing you a huge favor, and it’s only right to say “thank you” somehow.

One of the main elements of a pod is its quid-pro-quo factor. If you’re in a pod, you should also be liking and commenting on your fans’ posts. That means it may be smart to choose your pod based on folks you can tolerate, interact with in a public space, and genuinely like. If there’s an annoying fangirl who makes you want to crawl inside yourself every time she comes to a show, forget it – even if she is a superfan.

For some, the attraction of you actually showing up on their Instagram posts is probably enough to seal the deal without any extra perks or contests. After all, by increasing engagement on each other’s accounts, you’re also strengthening that fan-artist bond in real, genuine ways. You might be surprised to find out the effects your pod has on your offline fanbase.

The last question we need to ask is, “How long will pods be effective?” Who knows. Algorithms change all the time. For now, at least, take advantage of this strategy to boost your engagement, earn more visibility for your posts, and build connections with your fans.

Have you created your own pods on Instagram? Let us know in the comments!

Allison Johnelle Boron is a Los Angeles-based writer and editor. Her work has appeared in Goldmine magazine, Paste, and more. She is the founder of REBEAT, a “blogazine” focused on mid-century music, culture, and lifestyle.