British hard-rock heroes THUNDER will release their 13th studio album, “All The Right Noises”, on March 12, 2021. The official music video for the disc’s first single, “Last One Out Turn Off The Lights”, can be seen below.

“All The Right Noises” is a return to the full-throttle sound of THUNDER that has seen them create a hugely successful 30-plus-year career at the forefront of British rock, all built around the lifelong friendship of vocalist extraordinaire Danny Bowes and songwriting genius and guitarist Luke Morley.

“All The Right Noises” is an intense confection of illicit charms that reasserts their authority as the number one band in the land. Recorded in the months leading up to the first COVID-19 lockdown, it was originally due for release in September 2020. Strange to reflect then on how much of the new material appears to address the challenging new world we now inhabit.

On the album, Luke says: “All the songs were written and recorded pre-COVID. But it is interesting how if you look at some of the tracks through the prism of COVID, they still make a lot of sense.”

The volcanic lead single from the album, “Last One Out Turn Off The Lights”, could easily be mistaken for world-ending lockdown rage. But, says Luke, “That was directly about Brexit, but you could apply it to everything else.”

The track is indicative of both the ferocity and message of the album as a whole, with subjects tackled including depression, mental health, and diversity. With their knack for imaginative songwriting, “All The Right Noises” also takes aim at Donald Trump in a song written from his perspective, as well as a song Luke describes as “like the opposite” of “My Generation” by THE WHO in its message.

“All The Right Noises” will be available in 1CD, 2CD, 2LP, and 4LP formats, with the 2CD and 4LP releases containing bonus tracks. The LP versions feature a stunning pop-out of the “Singing Ringing Tree”, which appears on the album’s glorious artwork. The photo cover art was shot by the band’s long-term collaborator Jason Joyce. The sculpture, which also appears in the video for “Last One Out Turn Off The Lights”, is set in Burnley, Lancashire, and resembles a tree which harnesses the energy of the wind to create a choral, discordant sound.

“All The Right Noises” follows on from 2019’s stripped back and reimagined album “Please Remain Seated”, which continued THUNDER‘s consecutive Top 10 U.K. album chart run since their ecstatically received comeback six years ago.

With their most recent success, THUNDER have proven themselves as vital now as when they emerged with their debut album in 1990, “Backstreet Symphony”, and their hit follow-up in 1992, “Laughing On Judgement Day”, which was only kept off the top spot by Kylie Minogue. 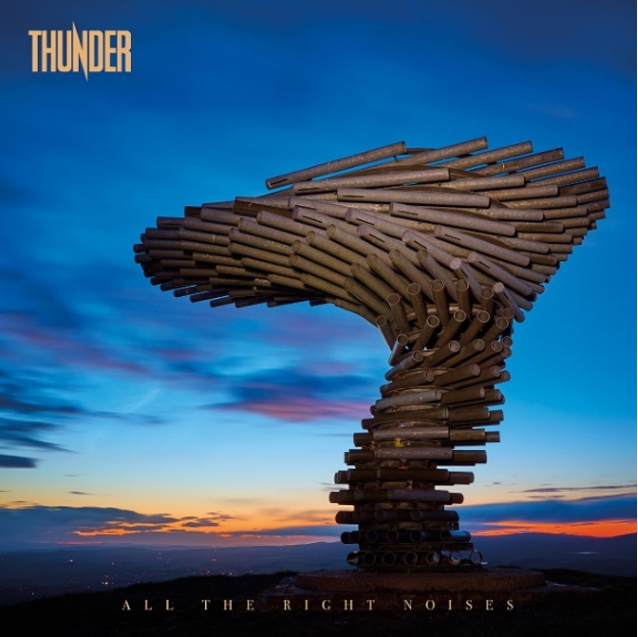