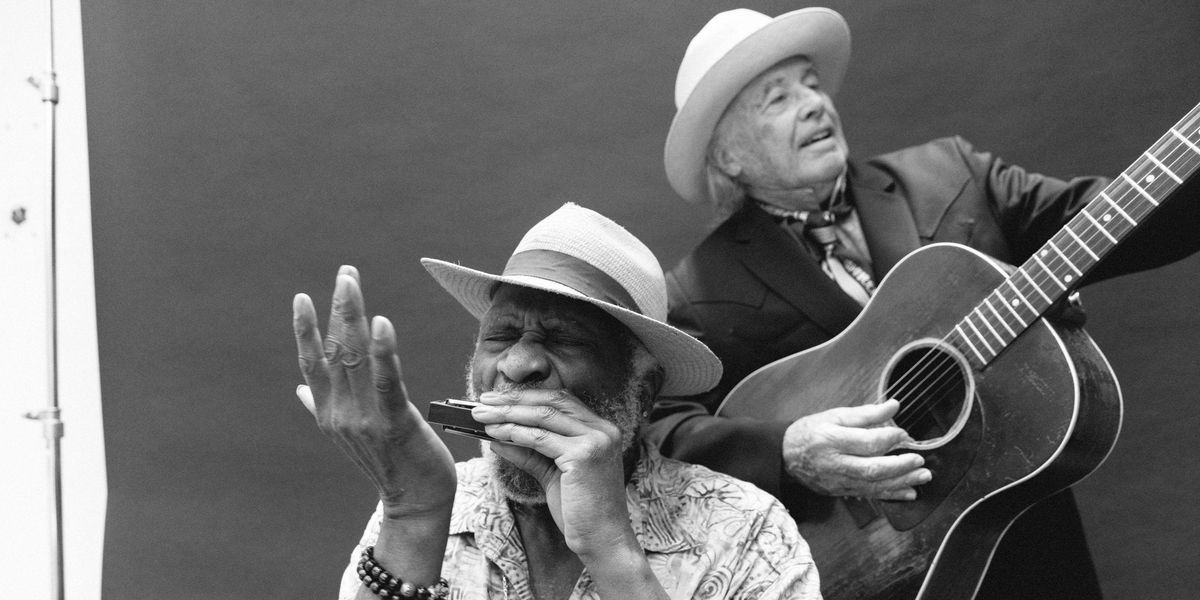 Deep into Taj Mahal and Ry Cooder’s Get on Board: The Songs of Sonny Terry & Brownie McGhee, percussionist Joachim Cooder lays out, letting the two elder musicians can take a pass through “Pawn Shop Blues.” To start, they loosely play around with the song’s intro on their acoustic guitars. “Yeah, nice,” remarks Mahal off-handedly in his distinctive rasp—present since he was a young man but, at 79, he’s aged into it—and Cooder lightly chuckles. They hit the turnaround and settle into a slow, loping tempo. It’s a casual and informal affair—some notes buzz, and it sounds like one of them is stomping his foot intermittently. Except for Cooder’s slide choruses, neither guitar plays a rhythm or lead role. They simply converse.

The two legends sound less like they’re making a record in a studio and more like they’re hanging out and catching up over some music. Mahal describes this feel as “ragged, but right.” It’s the same kind of collective sound that historic blues duo Sonny Terry and Brownie McGhee often possessed. But on Get on Board, it’s unique to these two old friends, who set out on their journeys long ago. “We’re bouncing off one another, we’re bouncing off the music, and we’re bouncing off the joy of being able to play this stuff, having the opportunity,” says Mahal.

Taj Mahal & Ry Cooder – The Making of ‘GET ON BOARD’

That “ragged, but right” vibe pervades each track on Get on Board, from the opening thump of “My Baby Done Changed the Lock on the Door” to the springy call and response of “Drinkin’ Wine Spo-Dee-O-Dee” to the closing ritardando on “I Shall Not Be Moved.” And it’s why, as Mahal explains, Get on Board transcends its recorded form: “It’s the kind of thing, when you listen in on it if you have the record playing in the other room, you’re sure those guys are in the other room,” he says. “Even though you know they’re not there, you gotta go and look.”

There are plenty of blues and folk albums that celebrate the genre’s early heroes—tribute projects that offer a feel-good time for musicians and listeners alike. And Get on Board is a masterfully produced, creative take on fantastic old music. But it’s also a one-of-a-kind reunion of two musical polyglots who, it’s fair to say, have explored the depth of the blues, following it on separate paths to the ends of the Earth and delving into the music from every angle—maybe more than anyone else. Now, five decades after their initial career-starting collaboration in 1965, they’ve come back to their roots together. 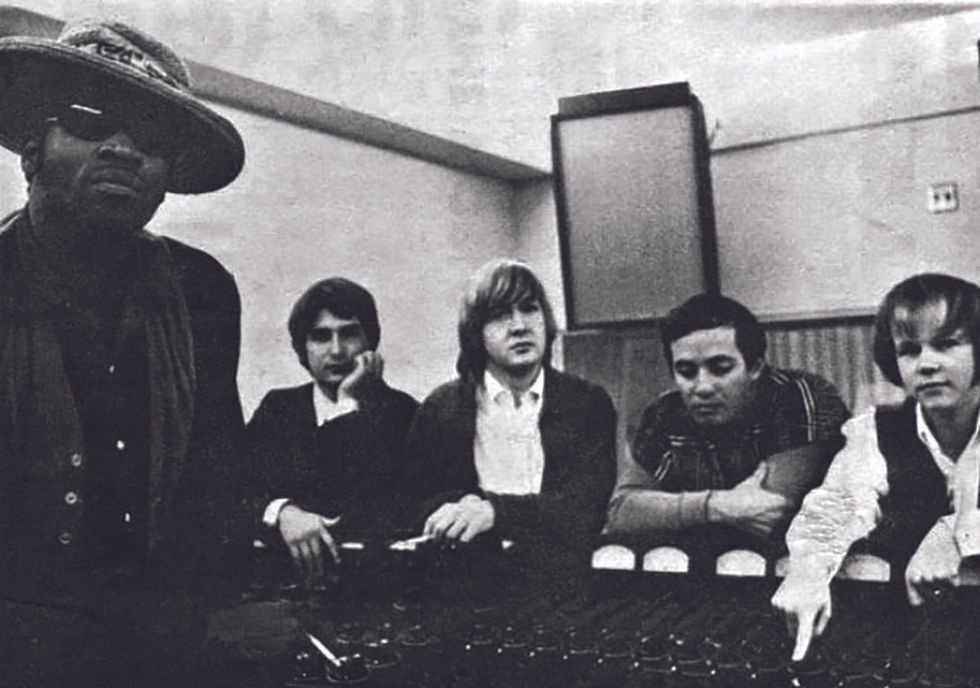 Each player’s early history is essential to their music as a duo. “Both of my parents were musical, and their culture was extremely musical and at a very high, sophisticated level,” Mahal explains. “We’re talking Ben Webster, Coleman Hawkins, Count Basie, Billy Eckstein, Billy Daniels, Duke Ellington, Ella Fitzgerald … this kind of music. But there was also swinging, dancing music that was happening. Jitterbugging, all kinds of different stuff.”

He began forming his own tastes in the nascent days of rock ’n’ roll, which Mahal says “was a step way down” from the music he was exploring—music by artists from the 1930s and ’40s, who, he points out, were still alive and recording. “I was getting their juice as it was coming through—not as an echo. By the time I came around to hear it, I kept thinking, there’s gotta be some older form of the music. And I would hear a little bit of it; my mother would sing some songs from South Carolina.” And thus began his lifelong search for deeper and deeper musical connections: “Once I found out that you could jump into that river, even into the ocean, and keep on finding it, it’s like fish in the sea. The more you find, the more there is—and you’ll never get to the end of it.”

A young Ry Cooder was simultaneously on his own version of this quest, digging deeper into the history of American music. At just 12 years old, Cooder found a record called Get on Board by the duo of Sonny Terry and Brownie McGhee, along with percussionist Coyal McMahan. It was just one point in a long line of musical discoveries that would inform his life and music. Cooder points out that Sonny Terry and Brownie McGhee “must have been the most recorded blues act ever.” But his interest set him apart from his pre-teen peers in California, and he soon developed a reputation that reached Mahal—five years his senior—all the way in Massachusetts.

Mahal tells the story of hearing a guitarist perform one night early in his career and says, “It was obvious this guy was listening to something else and played the instrument in a different way.” They struck up a friendship, and Mahal learned that this guitarist had studied with a Californian named Ry Cooder. Upon learning Cooder was just 17 years old, “I blew my top!” he exclaims. Soon enough, he packed up, booked a few gigs across the country, and headed west to find the young guitarist and start a band. 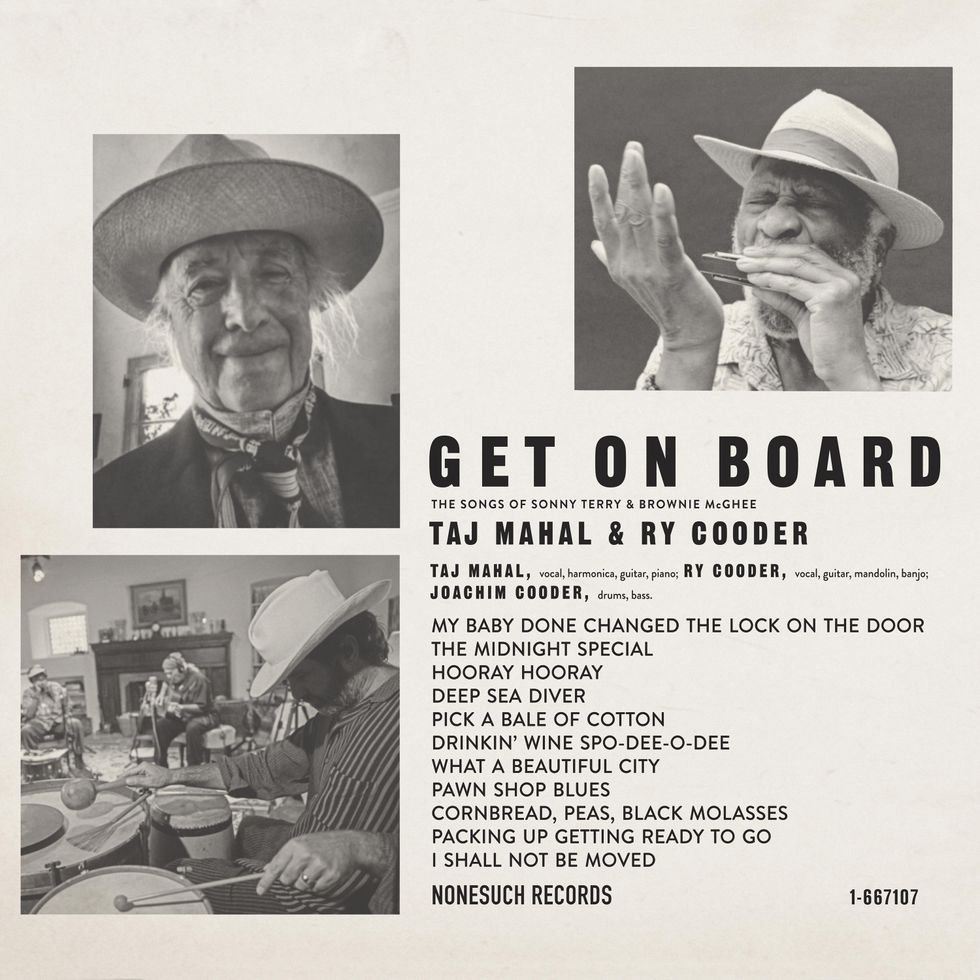 Despite their quick demise, Mahal looks back favorably on the Rising Sons: “Ry’s work on that album is still, to this day, stellar,” he says. “I could listen to it any time in any joint. Anything that he plays. There was never nothing that he ever played that I did not like. Nothing. He heard the music.” Mahal struck out on his own, with Cooder in the band for his 1968 self-titled debut. But they soon went their separate ways on long and fruitful careers.

Together, After a Lifetime of Achievement

It wasn’t until decades later, in 2014, when the Americana Music Association awarded Mahal a lifetime achievement award, that Mahal and Cooder would collaborate again. Backed by an all-star band at the AMA awards show at Nashville’s Ryman Auditorium, the two former Rising Sons revisited “Statesboro Blues,” which they recorded almost a half-century prior. But this version sounds nothing like the quick, youthful version on the ’92 reissue. Instead, the mid-tempo groove—driven in part by Don Was’ bass and Joachim Cooder’s drums—is slower and deeper, Mahal’s voice lower and stronger, and his dry, percussive fingerpicking is complemented by Cooder’s dark, fuzzy slide work.

While this warm, rousing reunion lasted just under five minutes—and got a serious standing ovation—it reconnected Mahal and Cooder and planted a seed. Soon enough, Mahal says he “took three or four instruments and a suitcase and a handbag and got on a train and went down to L.A. We got together and did some playing.” Mahal pitched Cooder on the idea of doing a project together, trusting Cooder to come up with the concept. “He knows what he likes, and he knows what I like,” Mahal says. Encouraged by his son, Cooder formulated the Get on Board idea, and as Mahal explains, “Next thing you know, I’m on the train again back to L.A.” 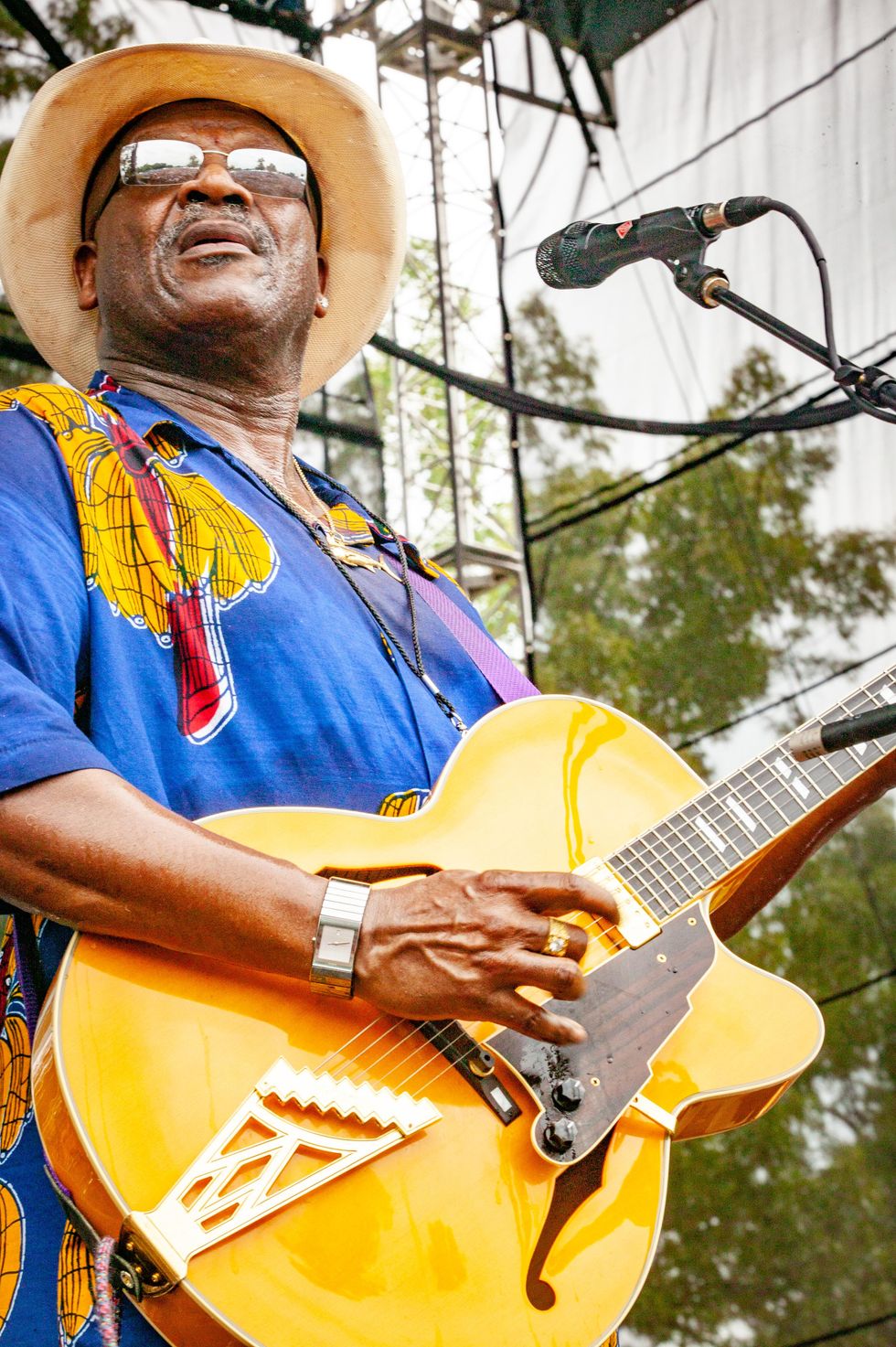 Cooder built his concept not just around the duo, but included Joachim. “There’s Taj and me. There was Sonny and Brownie,” he explains. “Duet music, right? But the original Get on Board included the mysterious Coyle McMahan on bass vocals and maracas. I always thought the trio was more interesting. So, Joachim stepped into the McMahan chair, and that gave us a wider range.”

When considering songs, Cooder points out that Sonny Terry and Brownie McGhee “had a huge repertoire for us to consider. You have to figure out what will work best, and a record can’t be all blues shuffles—for that kind of music you need Otis Spann or Memphis Slim, and a horn section, etcetera. So, we listened for songs more rural in feeling, like ‘Hooray Hooray,’ and ‘I Shall Not Be Moved.’ Folk-blues, as it used to be called.”

“A record can’t be all blues shuffles.” —Ry Cooder

“This music was making a fleeting disappearance from the inside of the music I was listening to,” says Mahal, adding that “something about the rural music was more connected with the African in it.” But he refutes the idea that their goal was to keep Sonny and Brownie’s music alive. Instead, he insists the music is already alive and he and Cooder are just helping it find new ears. “What you ain’t seen ain’t passed you yet,” he quips.

Cooder says they aimed to capture an “old-style” sound, “like a Folkways record,” the natural environment for these songs. To cultivate an authentically comfortable, low-key vibe, they set up in Joachim’s Altadena, Calfornia, living room for four days—three for live tracking and one for overdubs. And things proceeded simply, with “live singing—one take, maybe two at the most,” according to Cooder. 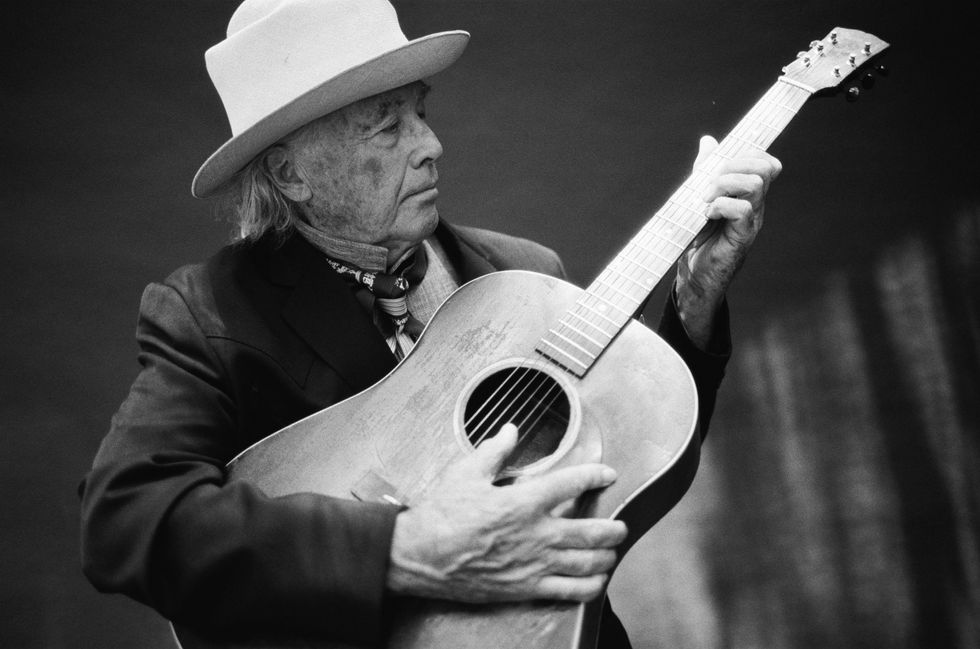 Get on Board isn’t a genre exercise, but it feels vintage, thanks in some part to the select gear they chose. Mahal switches instruments, playing a Steinway piano, harmonicas, and fingerpicking his Gibson Keb’ Mo’ Bluesmaster. Cooder brought along some vintage items. “I played a 1946 D-18, similar to Brownie’s—light and twangy,” he says. “Also, a peculiar Adams Brothers guitar, circa 1900. It’s rowboat size and super resonant. Check it on ‘Beautiful City.’ And my old Gibson F-4 mandolin on ‘Hooray Hooray.’ Taj commented that I had played the same instrument on his first solo record. The lead instrument on ‘Packing Up’ is a giant gut-string Fairbanks banjo, probably a custom order.”

Although most of the record is acoustic, the opening track features a driving electric slide part that bears Cooder’s unmistakable sonic thumbprint. “I overdubbed my usual bottleneck Stratocaster on ‘Changed the Lock,’” he explains. “That’s a White amp with a busted speaker, and a tape Echoplex which belonged to the great Leon Rhodes.” [Rhodes played guitar in Ernest Tubb’s Texas Troudabours.]

“What you ain’t seen ain’t passed you yet.” —Taj Mahal

Except for the tight, driving version of “Packing Up Getting Ready to Go,” there aren’t any particularly radical reinventions on Get on Board, so the biggest differences in Mahal and Cooder’s versions of Terry and McGhee’s songs are what the individuals bring to the music. As Mahal points out, Sonny and Brownie were the original purveyors, and he and Cooder are “a couple guys who have spent their lives bringing back these nuggets of great music for all to see and hear.”

But Mahal and Cooder both bring a warmth to the music, and it’s easy to think that stems from their mutual appreciation—a feeling that was missing from the original duo, who were famously at odds. In 1982, The New York Times wrote, “Mr. Terry, the harmonica player and singer, and Mr. McGhee, the guitarist and singer, are staunch individualists whose partnership has been marked by feuds, splits, and reunions.” Mahal and Cooder, as individual as they may be, are quite the opposite. It’s friendship that brought them back together after all these years, and helped fuel the creative energy on Get on Board, which Mahal says “felt exciting.”

And if that’s not enough, he adds: “I can’t think of anyone else I’d really wanna play this kind of music with.”

When Taj Mahal received a lifetime achievement award from the Americana Music Association, he joined the award show’s house band, which featured Ry Cooder, onstage for this performance. Not only is the performance stellar, it also put the two back in touch and catalyzed the Get on Board project.

ANVIL's STEVE 'LIPS' KUDLOW Foresaw Documentary's Success: 'Everything That I Predicted Is Still Going On'

SYMPHONY X Is Planning To Release New Studio Album In 2023

NICKELBACK Frontman On PANTERA Reunion: 'As Long As PHILIP ANSELMO Brings It, It's Gonna Be Great'

WATAIN Frontman: 'The Metal That Shook My Soul Was Always Written By Liberated Spirits'