How an Italia Speedster, a sturdy Jazz bass, and a little “sad chorus” can kickstart an international dance party.

The last two years have given us plenty of reasons to seek a jaunty, joyous listening experience in our music. And one of the best finds around is Los Bitchos—the all-female, internationally assembled outfit consisting of Australia-born Serra Petale (guitar), Sweden’s Josefine Jonsson (bass), Uruguay’s Agustina Ruiz (keytar), and South Londoner Nic Crawshaw (drums).

Before Los Bitchos’ Nashville opening slot in support of Belle and Sebastian, PG was invited to the historic Ryman Auditorium for a quick and loose gear chat. We covered their streamlined setups that include a favored, fast Italian ride (not a Ducati) that made the trip from the U.K., learned why Petale is “Miss Chorus” and loves the effect’s “sad sounds,” and was schooled on why Jonsson just needs a J bass and an Ampeg amp to make the room twist and shout.

Brought to you by D’Addario XS Strings. 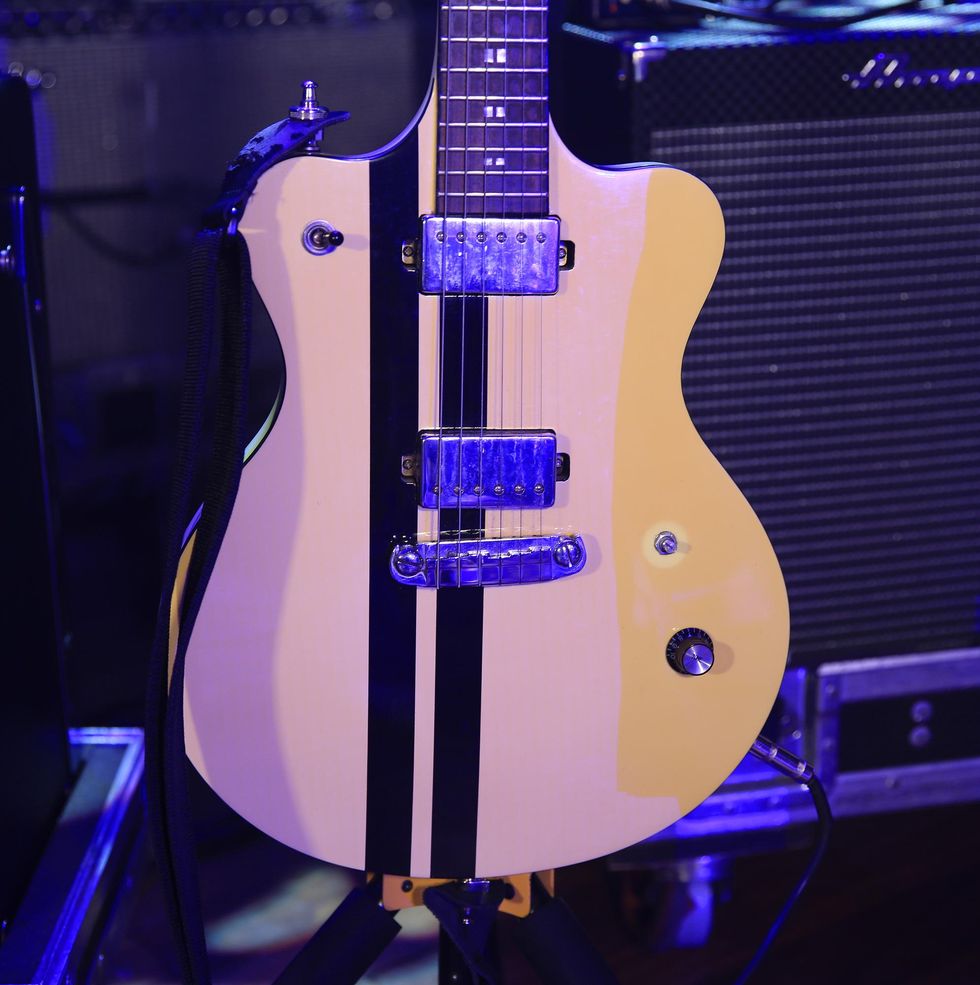 “For me, the big difference between a workhorse guitar you take on tour compared to the instruments you keep at home is the humbucker pickups,” stated Los Bitchos guitarist Serra Petale during a recent Big 5 video for PG. Petale expounds in the Rundown, saying that she prefers performing with the above Italia Guitars Maranello Speedster II because its humbuckers offer beefier tones and a louder presence compared to the single-coil guitars she prefers for recording. “The Los Bitchos live show is a lot different than the album experience,” she adds. Her only touring guitar for this U.S. run takes Rotosound BS10 British Steels (.010–.046). 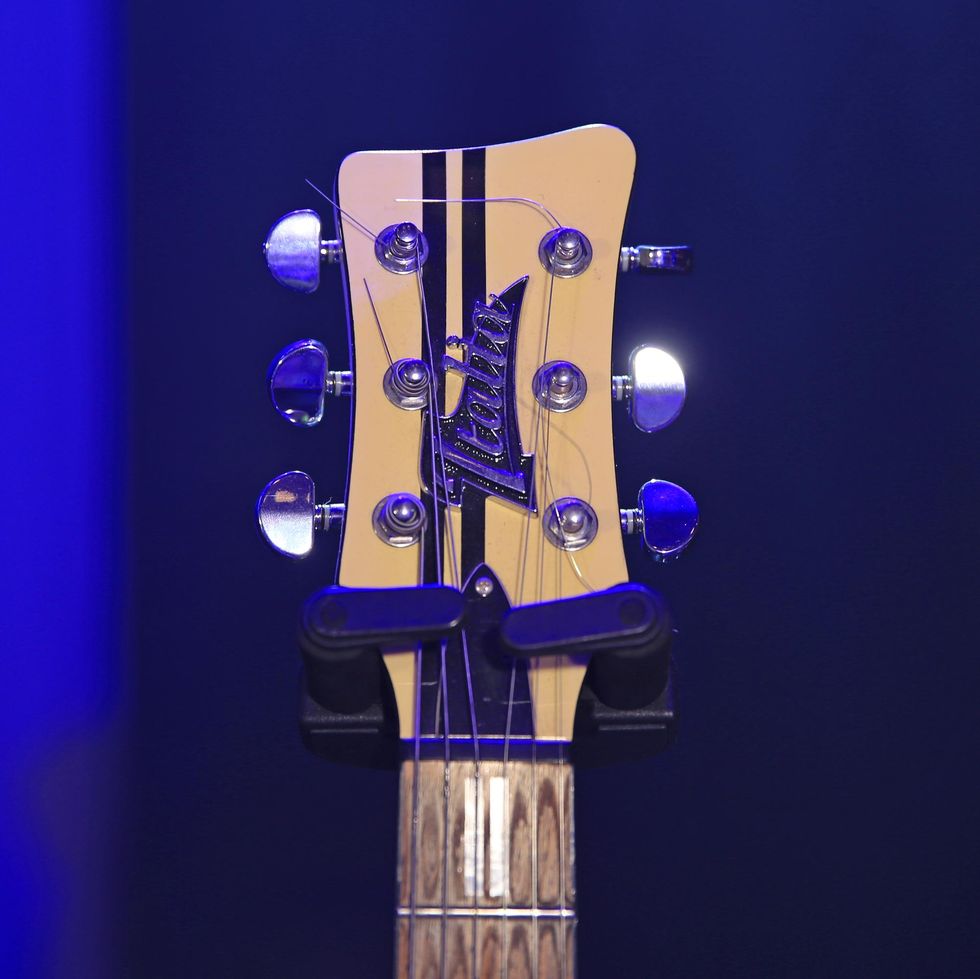 A shot of the Maranello’s cool matching headstock. Note the stylish Italia badge and how the dual racing stripes continue. 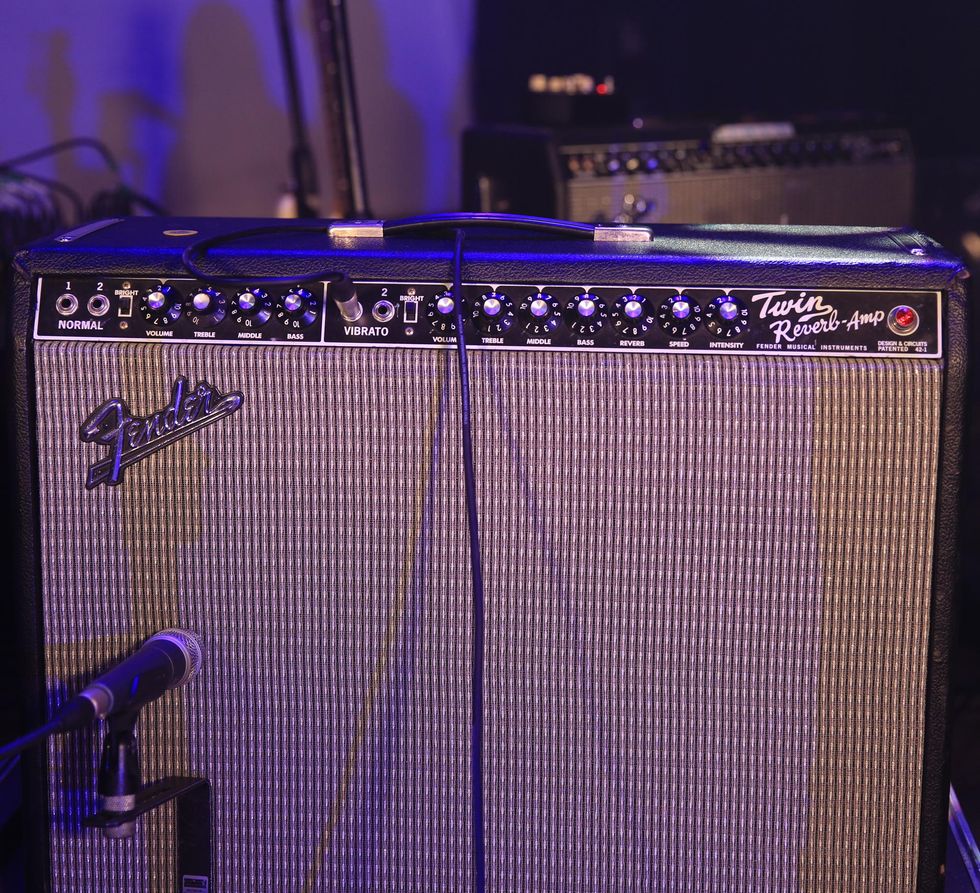 This Fender Twin Reverb offers Petale enough punch for her guitar to be heard and a clean platform for her fuzz and chorus pedals to reconfigure her signal.

“I am Miss Chorus” 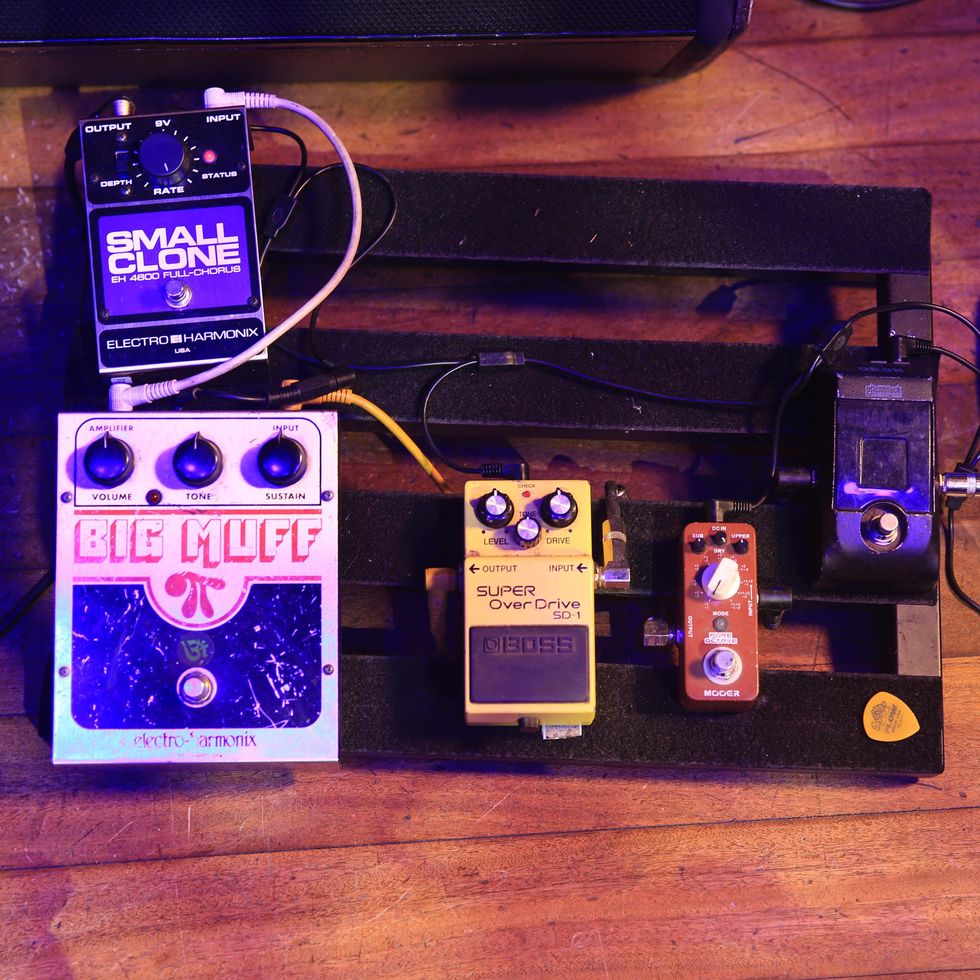 That’s what Serra Petale declared when asked why she identified a chorus pedal as her secret weapon in the earlier Big 5 video with PG. Her current main modulation manipulator is the Electro-Harmonix Small Clone. (In the Big 5 video, she named the EHX Neo Clone as her go-to, but she’s since acquired the stomp favored by Kurt Cobain.) Another Mike Matthews design makes an appearance in the shape of a big-box EHX Big Muff. The two other noisemakers are a Boss SD-1 Super Overdrive and a Mooer Pure Octave. A Korg Pitchblack keeps her Italia in line.

Just a J for Josefine 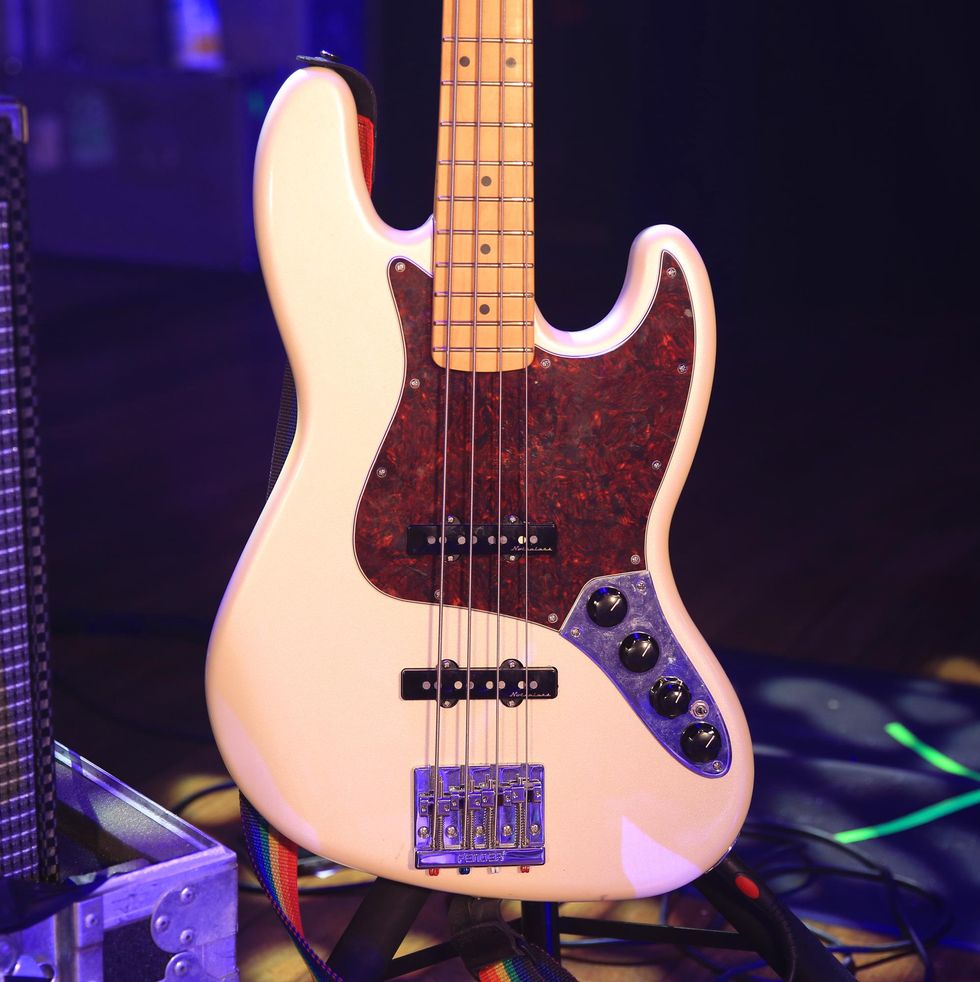 The newest addition to Josefine Jonsson’s bass family is her current crush—a Fender Player Plus Jazz Bass that’s been “just lovely to play.” The stock J has Player Plus Noiseless Jazz Bass pickups, a 3-band active EQ with an active/passive toggle, a 4-saddle HiMass bridge, and a modern C-neck shape. She keeps both volume controls wide open and dials in dynamics with her attack. She notes in the Rundown that she’s always bonded more with the Jazz than the Precision, because of the J’s smaller size and thinner neck.

Ain’t Nothing to It But to Rocket 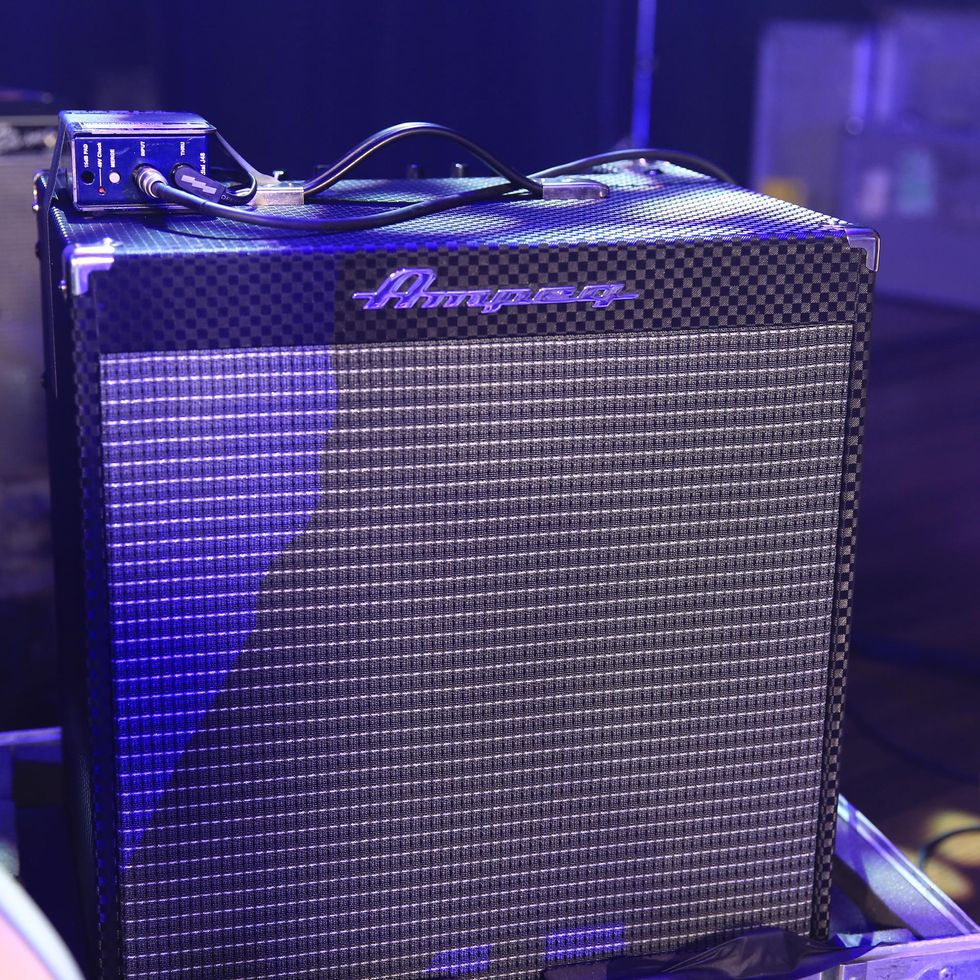 For this run of U.S. shows supporting Belle & Sebastian, Josefine plugs her Player Plus J straight into this Ampeg Rocket Bass RB-112 because, as she put it in the Rundown, “anything Ampeg and I feel like I’m in safe hands.”