The Ronnie James Dio estate and Z2 Comics have teamed up to bring you “Dio – Holy Diver”, the graphic novel adaptation of DIO‘s classic album “Holy Diver” and the artwork it inspired.

Penned by acclaimed horror comics writer Steve Niles (“30 Days Of Night”), the book will tell the tale behind the events leading to the powerful moment captured on the cover of DIO‘s debut album — definitively addressing 30 years of fan speculation. Why is the priest being thrown into the ocean? Who is truly the villain in this scenario? All of these questions are exclusively answered for the first time within the 120 pages of this graphic novel.

Ronnie‘s widow and longtime manager Wendy Dio said: “Steve Niles tells the story behind the album cover ‘Holy Diver’, a story about how you can’t judge a picture by the way it appears, which is what Ronnie wrote many times in his songs; that you have to see inside the person and not judge them by the way they look or by what they wear. Together with Scott Hampton‘s amazing artwork, they tell the story of ‘Holy Diver’, and I know Ronnie would have given his stamp of approval on this great graphic novel.”

Z2 publisher Josh Frankel said: “We have managed to work with some of the greatest legends in both comics and music, and a Dio graphic novel with a cover by the great Bill Sienkiewicz perhaps sums that up best. This is one of the most iconic heavy metal album covers in history.

“We are honored to pay tribute to the originator of the universal sign of the music that he has inspired since he first took the stage with BLACK SABBATH 40 years ago. Working with Wendy Dio directly to ensure it is true to his vision is the next best thing to working with Ronnie James Dio himself, and we have hit a new high note with this one!”

Niles added: “I’m so excited to be writing this book. I hope I do Ronnie James Dio justice.”

Tentatively due in the summer of 2021, “Dio – Holy Diver” can be pre-ordered now.

The Deluxe Edition of the graphic novel includes:

The Standard Edition of the graphic novel includes:

Since his 2010 passing, Wendy has kept Ronnie in the public eye largely through the much-debated Dio hologram tour. More recently, Wendy, in cooperation with BMG, released a series of vinyl reissues spanning Ronnie‘s solo career.

This past May, Wendy told Consequence Of Sound that Ronnie‘s long-awaited autobiography is “on hold” due to the coronavirus pandemic which is sweeping the globe. Legendary rock journalist Mick Wall is working with Wendy on the book, which was partially written before the singer’s death and which was originally scheduled to be published several years ago via MTV Books.

Ronnie James Dio passed away of stomach cancer on May 16, 2010 at the age of 67. A few months after his death, MTV Books announced plans to release his memoir, which at the time was going to be called “Rainbow In The Dark: The Autobiography Of Ronnie James Dio”.

Dio was renowned throughout the world as one of the greatest and most influential vocalists in heavy metal history. The singer, who was recording and touring with BLACK SABBATH offshoot HEAVEN & HELL prior to his illness, was diagnosed with stomach cancer in late 2009. He underwent chemotherapy and made what is now his final public appearance in April 2010 at the Revolver Golden Gods Awards in Los Angeles.

Also tentatively due in 2021 is a documentary that will cover Dio‘s career from his early days with ELF to his final project, HEAVEN & HELL. It is the first documentary about Dio to be fully authorized by the artist’s estate. BMG is both financier and executive producer of the film.

Z2 has worked across genres to deliver an authentic experience to diverse audiences. Some of the publisher’s best-selling books include “Apocrypha: The Legend Of Babymetal”, “Yungblud Presents: The Twisted Tales Of The Ritalin Club” and “Eden: A Skillet Graphic Novel”, alongside debut works of graphic fiction by Dan Auerbach (THE BLACK KEYS), Andy Biersack (BLACK VEIL BRIDES), DJ Paul Oakenfold, Internet sensation Poppy, jazz trumpeter Dave Chisholm and others. 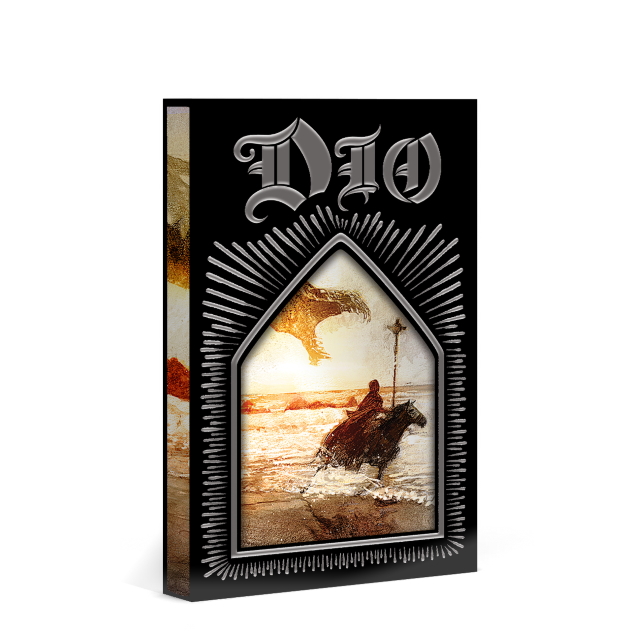 DAVE LOMBARDO: How I've Been Staying Busy During The Pandemic