Chicago legends of “murder metal/death metal” MACABRE will release their first full-length album in almost 10 years, “Carnival Of Killers”, on November 13 via Nuclear Blast Records. The disc’s first single, “The Lake Of Fire”, can be streamed below.

MACABRE‘s Corporate Death (a.k.a. guitarist/vocalist Lance Lencioni) comments: “‘The Lake Of Fire’ is about the hidden bunker that Leonard Lake and Charles Ng had where they tortured and killed young women with tools and filmed it all. Those were two very evil men, so I thought the title was fitting!!! I started writing the chorus back in our ‘Grim Scary Tales’ era and finally finished the song all these years later for the new album ‘Carnival Of Killers’. I hope you like it. I wanted a lot of variety on the new album. This is just a taste.”

“Carnival Of Killers” was recorded and mixed by Tomek Spirala of Studio1134, with the exception of drum tracks, which were laid down at Kiwi Audio with the help of Mark Walker. The mastering of “Carnival Of Killers” was handled by Jean-François Dagenais at JFD Studios in Dallas, Texas. The “Where’s Waldo” meets serial killer album artwork was created by Corporate Death (lead singer, a.k.a. guitarist Lance Lencioni) and artist Laz Gein and highlights the album’s most memorable references.

Formed in 1985, MACABRE blends elements of true crime, math rock, nursery rhymes, punk, thrash, folk melodies, death metal, jazz fusion, black metal and more into an energetic, catchy and unmistakable amalgam. “Murder metal” refers to MACABRE‘s signature style. It’s a genre of one. The all-too-true tales of man’s inhumanity to man are delivered with knife-edge precision, interspersed with Corporate Death‘s patented (back when he was a toddler) screech.

Fast and heavy, with a focus on things that make happy shiny people cringe, the original members, Corporate Death (guitar and vocals), Nefarious (bass and vocals) and Dennis The Menace (drums) are still together. MACABRE have brought mayhem to the world in the past decades, playing dozens countries over the years. MACABRE‘s rabid fans, including members of bands ranging from CARCASS to SLIPKNOT, relish the band’s tight and increasingly sophisticated music; they exult in their musical chops as much as in the band’s sense of humor, their killer music, and its deadly subjects. 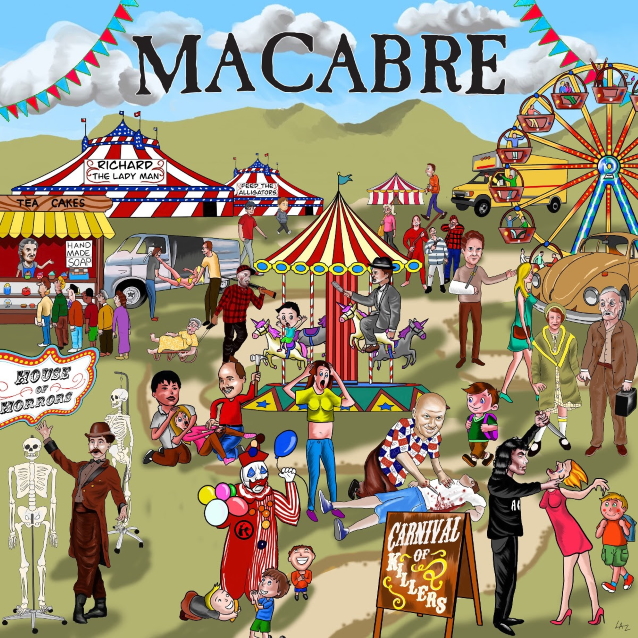 Ex-AC/DC Drummer SIMON WRIGHT On Pandemic: 'I Couldn't Believe What I Was Seeing And Reading When This Thing First Broke Out'

ACCEPT's WOLF HOFFMANN: 'There Definitely Was A Time When I Thought Metal Is Over'