Moving into yet another artistic medium, modern rock storyteller Claudio Sanchez of COHEED AND CAMBRIA has announced a partnership between his comic book brand Evil Ink and leading action figure manufacturer and collectible producer NECA to release the inaugural line of “The Amory Wars” action figures. Pre-orders are live today on the band’s official site and are expected to ship for the holidays.

This fulfills a dream for Sanchez, as he integrates the sci-fi concept behind his band’s concept albums (“The Amory Wars”) into the toy space for the first time. Story protagonists, Coheed and Cambria Kilgannon come to life as intricately detailed eight-inch fully posable action figures with detachable weapon accessories. To promote the figures, the band shared a throwback nineties-style “action figure commercial” featuring the heroic husband and wife duo as a nostalgic nod to the toy renaissance of their youth.

Regarding the partnership with NECA, Sanchez commented: “Lights, Camera, Action… Figures! I’m very happy to announce the release of our collaboration with NECA in bringing ‘The Amory Wars’ line to life. As a child, toys played an integral role in the foundation of who I am now as a storyteller and the excitement never fades when I get to take this step with any of my creations.”

Earlier this summer, COHEED AND CAMBRIA and Grammy Award-winning singer Rick Springfield served up a blockbuster sequel to one of the most iconic stories in rock ‘n’ roll history with “Jessie’s Girl 2”. The track, which finds the two extending the narrative of “Jessie’s Girl” with some unexpected twists, is available on all streaming platforms and is joined by an official music video (directed by Craig Bernard and Cully Bunker). Featuring both Springfield and the band, the video comically explores the unexpected and diabolical nature of Jessie‘s girl, proving that things are not always as they seem.

COHEED AND CAMBRIA has a handful of tour dates scheduled for 2021, including a gig with BLINK-182 in Milwaukee, Wisconsin on July 2, Riot Fest in Chicago, Illinois on September 16, and their very own S.S. Neverender Cruise setting sail from Miami, Florida on October 26.

Comprised of Claudio Sanchez (vocals / guitar), Travis Stever (guitar), Josh Eppard (drums) and Zach Cooper (bass), COHEED AND CAMBRIA has gripped listeners and press around the globe with its visionary compositions and conceptual mastery. In 2018, COHEED AND CAMBRIA made a stunning return with its new album “The Unheavenly Creatures”, which debuted at No. 1 on Billboard‘s Hard Rock Albums chart, No. 6 current sales and Top 15 on the Billboard 200 chart. Boasting 15 songs over 78 minutes, “The Unheavenly Creatures” marked COHEED AND CAMBRIA‘s furious return to concept albums, the ‘First Act’ in a brand-new story arc set within the backdrop of “The Amory Wars” universe. The acclaimed record is highlighted by standout tracks “The Gutter”, “Unheavenly Creatures”, “The Dark Sentencer” (premiered by Marvel Studios) and “Old Flames”, the latter of which features an official music video directed by Charles “Chas” Todd. The cinematic clip features striking choreography masterminded by Broadway luminary Jon Rua, who is known for his roles in the 12-time Tony-nominated “Spongebob Squarepants” and the Tony– and Grammy Award-winning hit musical “Hamilton”. 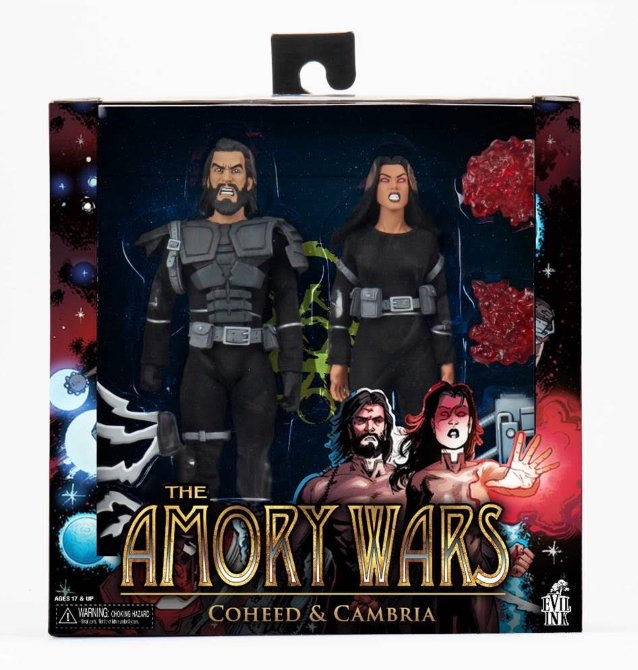