BLACK VEIL BRIDES will celebrate the 10th anniversary of their debut, “We Stitch These Wounds”, with a brand new, reimagined, re-recorded 2020 edition of the album titled “Re-Stitch These Wounds”, released on July 31 via Sumerian Records. Audio samples of all the tracks that are set to appear on the disc are available in the YouTube clip below.

Speaking on “Re-Stitch These Wounds” and his band’s 10th year milestone, frontman, vocalist Andy Biersack says: “We are so excited to have the opportunity to revisit and reimagine our debut album for its 10-year anniversary.

“A decade ago, I was just a teenager trying to find my way and meet like-minded musicians. I was fortunate enough to meet Jake and Jinxx and we clicked instantly. I can remember writing so many of these songs in the tiny Hollywood apartment Jake and I shared and tracking our own demos, so to have the opportunity to take a look at these songs again and update them for the modern era of the band with Jake at the helm producing and mixing is a full circle moment for us.

“We have never been happier as a band then in the current lineup and it’s amazing to get the chance to start over and do with this record what we always wished we could have done the first time around.

“This isn’t meant to be a replacement for the original album but rather a companion piece that we hope fans can enjoy and see the musical evolution of the band in a unique way.”

BLACK VEIL BRIDES will take part in a very special album-release streaming event on Saturday, August 1 when they perform the “Re-Stitch These Wounds” in full for the first time ever, to be broadcast live from the world-famous Whisky A Go Go in Hollywood, California. The event will begin at 2 p.m. PST / 5 p.m. EST. Fans can purchase tickets to the album release show from BlackVeilBrides.Live

Regarding the 10th anniversary of BLACK VEIL BRIDES and his history with the band from the early days of their career, Sumerian Records founder/CEO Ash Avildsen says: “It’s been one hell of a journey working with BVB as their booking agent from when this record first came out until now being their label partner.

“Having their debut album re-recorded with modern production under the Sumerian banner is a true milestone for us that I am very proud of after working with Andy and the BVB family for all these years.

“Almost everyone told me I was crazy back then to sign up for the ride and that it wouldn’t work. Well? Now here we are with the band being one of the biggest break-out hard rock acts of the past decade and the best is still yet to come.”

Since the release of “We Stitch These Wounds” in 2010, BLACK VEIL BRIDES have grown to be one of the most successful and revered bands in modern rock. The album sold 11,000 copies in its first week and debuted at No. 36 on the Billboard Top 200 and No. 1 Independent Releases, a phenomenal feat for a band on their debut with no major label support, just an insanely fanatical following. Each of their subsequent four studio albums debuted in the Top 20 of the Billboard Top 200, with two albums — “Wretched And Divine” and “Black Veil Brides” — debuting in the Top 10. They have also released a chart-topping live DVD, “Alive And Burning”. The band has over 1.1 million monthly Spotify listeners, has clocked up 400 million total Spotify streams, 500 million YouTube views and has a combined social media reach of over 11 million fans.

BLACK VEIL BRIDES‘ strident opposition to conformity, false authority, and obstacles (from both within and without) strikes a chord with every outcast who ever felt drawn to the allure of the dark. It’s evident in the 150 million views accumulated by “Knives And Pens”, the first video released from “We Stitch These Wounds”. The RIAA-certified gold single “In The End”, which itself boasts 125 million YouTube views, is proof that the group whose merchandise dominated Hot Topic stores before they’d dropped their debut album was no passing fad or ill-fated “scene.” This was built to last. 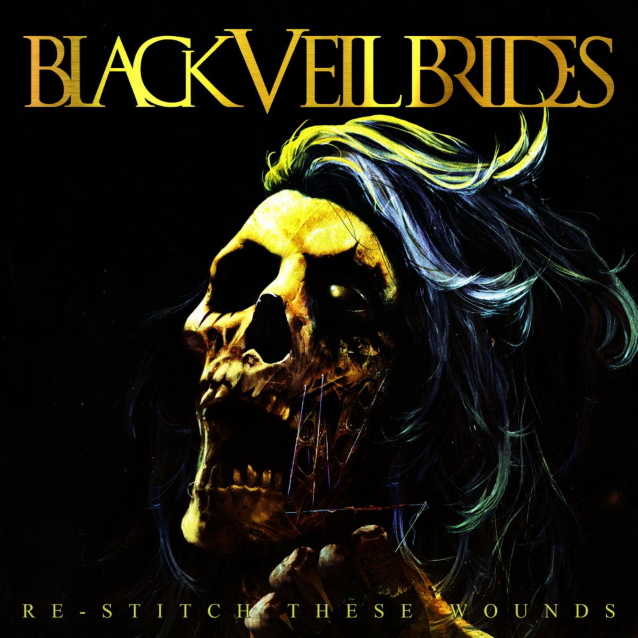